Every Dream Begins With A Dreamer… 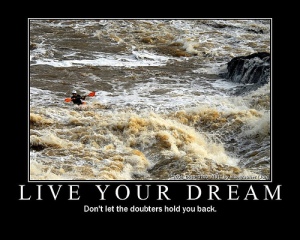 “I got a lot of support from my parents.That’s the one thing I always appreciated. They didn’t tell me I was being stupid; they told me I was being funny”  – Jim Carrey

I love this quote. Speaking as a mother who has enthusiastically supported her children to follow their dreams (a trite expression, I know), I have often been on the receiving end of disapproving looks when asked about my kids’ studies. This is because their dreams are not about engineering, medicine or any other socially acceptable career. And, as much as they recognize the importance of being able to support themselves, as well as the appeal of earning a high income, I think my son, Peter, put it quite well when he said his goals in life are not confined to a paycheck. So, what exactly is it they want to do, you ask? Well….

My son, Brian, is pursuing his Master’s degree at DePaul University in Digital Cinema, Screen Directing. That’s right…he’s a filmmaker. Brian has been making movies since he was a kid. He would put up signs around the neighborhood announcing auditions. I remember my feeling of panic the first time  seeing them posted, rushing home to have a heart-to-heart with my budding filmmaker, to make sure he understood that he could not cut anyone who showed up. He’d have to find a place for them. Every single kid who showed up to audition would HAVE to have some role to play in the production. As it turned out, that really wasn’t a problem, since no one showed up for his auditions. Ever. The cast was always made up of Brian, Peter and their neighbor and friend, Alex (and, on occasion, my daughter, and her best friend, Alex’s sister). I often wonder if those kids who shunned his invitation years ago might come to regret it someday…

During his first class at DePaul, Brian’s classmates introduced themselves and told their fellow students about their previous bodies of work. Brian related his early projects in the neighborhood with their rag-tag crew, explaining that, because of the scarcity of actors, his films usually included several sets of “twins”, as they needed to play many parts. And, production quality was quite low. Well…extremely low. I remember one movie, which was set on a battlefield (our back yard). The boys had arranged lawn sprinklers just out of screen shot (pretty much) to simulate rain and as the “soldiers” are seen onscreen, fighting for their lives, shooting unseen enemies with “rain” pouring down on them, our neighbor’s dog, Diesel, can be spotted in the background running back and forth, barking madly at the scene. I’m happy to report that Brian has since gone on to create much more sophisticated films, but those raw movies made by that young boy with a passion will never be discarded. Ever.

One of his short films was entered into the DePaul University Premiere Film Festival, hosted at the Music Box Theater in Chicago. Sixteen films were chosen out of over one hundred. They were screened and judged by leaders in the industry, including the  Sundance and Los Angeles Film Festivals. Brian’s four-minute film won for Best Editing. At one point during the editing process, he and his team spent four hours removing twelve frames for the final version. What does “twelve frames” mean? It means one-half of one second. A Professor of Editing at DePaul asked Brian’s permission to include that film in his class. Another short film was recently accepted into the Los Angeles Horror Film Competition and walked away with another award for Best Editing. To say we were proud of his wonderful accomplishment would be a colossal understatement.  My point in all this bragging is to try to make people understand that this is who he

To say we were proud of his wonderful accomplishment would be a colossal understatement.  My point in all this bragging is to try to make people understand that this is who he is. This is who he has always been. My husband and I couldn’t make him be an accountant.  I suppose we could have, but how unhappy he would have been…

My son, Peter, and daughter, Mary Kate are currently  Percussion Performance majors at the University of Iowa. The Percussion Ensemble recently won a nation-wide competition to perform at the Percussive Arts Society International Convention, earning them the title of Number One Collegiate Percussion Ensemble in the country. That they were able to share in the experience was enormously gratifying for my husband and me. Mary Kate recently told me that she feels so incredibly fulfilled studying, practicing and performing music. How could I ever question her path? And, as Peter so eloquently said, the world would be a sad, sad place without music. For a beautiful peek into the heart, mind and soul of a musician, I would direct you to a short essay he penned, entitled Explain Yourself. (http://pjnmusic.blogspot.com/2013/09/explain-yourself.html)

That leaves my eldest son, Mike, who, admittedly chose a more mainstream career path in finance. The others refer to their big brother as The Suit. My dream is to one day watch as my brood sweeps the Academy Awards with Oscars for Best Film, Best Director, Best Film Score, Best Screenplay (picked up by our neighbor, Alex, a talented writer who contributed to those early film scripts). And, of course, Best Producer for Mike, because every great director needs a great producer and Brian has already made it clear that Mike is his guy. Not a bad dream, huh? As Pete says, when people sarcastically ask him what he’s going to do with that degree, he just says, “I’m gonna’ be happy for the rest of my life.” What more could a parent ask for?

4 responses to “Every Dream Begins With A Dreamer…”