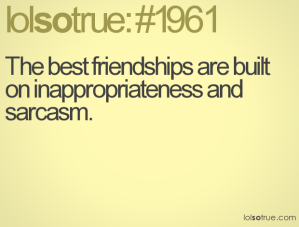 A sense of humor is a terrible thing to waste, which is why I am taking this opportunity to publicly announce my new New Years Resolution (stop judging) to surround myself with people who can appreciate a good joke. I’m not talking about practical jokes. I’ve never been a fan of those. No, I’m talking about dry humor. We, here at BWB, believe there is direct correlation between a person’s ability to understand dry wit and their intelligence level. Nothing screams I HATE YOU more than deftly dropping a remark so dry it threatens evaporation only to be completely missed by the intended recipient (thus evaporating) or worse, is met with a serious look of concern. What the world hears me saying, at this point is, “I was kidding…It was a joke…”  What I’m thinking is “OMG I hate you. Remind me to NEVER talk to you again.” What a waste of a perfectly dead-panned moment.

What must life be like for those who fail to see humor in life? Yes, even during some of the really crummy moments. I would say, especially during those times. I mean, come on people…gallows humor is often a requirement for surviving difficulty. (Sidenote: I will allow that religious faith is also necessary, but that’s a topic for another blog. So, if that’s where you’re headed, lay off…) I think easily offended people must just feel sad and offended all the time. Well, maybe not ALL the time – I know they’re often outraged and incensed, as well. So…they’ve got that going for them.

Of course, I know a lot of people who think they have a great sense of humor, but in reality it is so tame, that to say it’s boring, tedious, dull, monotonous, dreary, uninspiring or mind-numbing (yes, I consulted a thesaurus) would be a colossal understatement. You know the type: the ones who laugh out loud at Ziggy cartoons. They’re often very nice people, but uninteresting. And life’s too short to spend with obtuse, boring, though possibly rather, nice people. Did that come off as harsh?

I knew my BWB partner was my soul-mate when, soon after we met, she remarked that she hated her kids. Yes, we were destined to be best friends because I, too, hated my kids. As they are quick tell anyone within earshot, I blame them for ruining my life. Truth is, I had a pretty sweet deal going until their arrival. I had a plan: to be rich and awesome. I’ve only achieved half of my goal: while no one can dispute  my awesomeness (it’s also really important to have a rather exaggerated ego), I am still working on the “rich” part. So far, I’ve worked my way up to a fairly respectable “working-class poor.”  Why? Because, these creatures demand food, clothing and an education EVERY SINGLE DAY for a humongous chunk of their lives. That’s right…every day. Just try withholding it, too. It can get ugly…plus the authorities get involved.

Now, at this point, I’m afraid I’m going to have to say those dreaded words: I’m kidding. That was a test and I hope none of you failed. The truth? My kids are amazing. They’re the best thing I ever did. I mean, who else (besides my BWB pal…duh) would totally not judge my habit of pouring a glass of wine before sitting down to an episode of “Intervention”?

So, today I begin my mission of seeking out only those who can appreciate a biting, sarcastic look at life.  Hey, if I can’t be rich, I might as well laugh – at least it’s free. Care to join me?

PS: If you really want to be my friend…browse the web for our Box Wine Budget Page on Facebook and “Like” us already. Not sure what’s taken you so long. All you have to do is click on this link.     http://www.facebook.com/pages/Life-On-A-Box-Wine-Budget/115899855127046

World through my lens